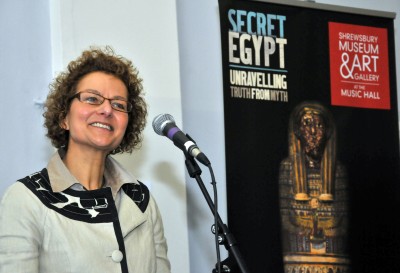 Marina Ibrahim one of the guest speakers at the launch event of ‘Secret Egypt – Unravelling Truth from Myth’ at Shrewsbury Museum & Art Gallery which opened the doors for its brand new blockbuster exhibition on 23 January 2015).

Some of Egypt’s best-kept secrets about food and recipes are as old as the pharaohs:

On my courses you can learn these recipes, which are delicious and easy to cook.

“Enjoy this exciting exhibition and I hope it resonates with Howard Carters words, who – when discovered the tomb of Tutankhamun and being asked: “Can you see you anything?” answered: “YES, WONDERFULT THINGS!”

‘Secret Egypt- Unravelling Truth from Myth’ is a touring exhibition organised by the Herbert Art Gallery & Museum. It runs from 24 January to 26 April  2015 and brings together over 150 objects drawn from Birmingham Museums’ significant ancient Egyptian collection.

Based on the evidence of objects spanning 4000 years, this exhibition will allow visitors to investigate the truth behind some of the popular myths about ancient Egypt.

The country and its civilisation have always fascinated people and have been the inspiration behind many books, films and TV shows. Such is its resonance in society that some of the most popular and commonly held beliefs on the subject are mere fabrications by the film industry used to sensationalise the story and excite the audience. Secret Egypt will show that a truer picture of the past can still be remarkable.