Talking to the World About Egypt 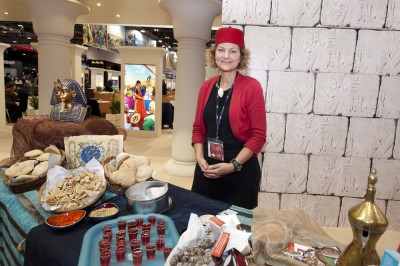 Anyone who knows me won’t be surprised to learn that I love talking to people about Egyptian food.

So, I was honoured and excited to be invited by the Egypt State Tourism Office to provide a “Taste of Egypt” culinary samples for their stand at the World Travel Market in London. It was an amazing event and I met lots of wonderful people who were intrigued and impressed by my Egyptian food samples and teas. I met some great contacts too and have been invited to host cookery classes at a five-star resort at Edde Sands in The Lebanon which is very exciting, and there is also the potential of being involved in an Arabic TV programme, so it was a fantastic event for me professionally.

But most importantly it was a real pleasure to bring Egyptian cuisine to a wider audience of people from across the country, and it was interesting to hear that a lot of them had been to Egypt but had not really heard about the wonders of the food. A big part of that is due to Egyptian people not shouting enough about their cuisine, even though they are proud and passionate about it, and food producers do not know how to market themselves. That’s what the Egypt State Tourism Office is trying to change by attending events like the World Travel Market and I was really pleased to be involved.

Over the past 10 years or so, Shropshire food producers have really embraced the importance of selling themselves and putting the county on the map as a food destination. One of its latest projects is “Made in Shropshire” a recipe book with contributions from Shropshire’s chefs, producers, foodies, farmers, shops, restaurants, all doing something great with local food and drink. I am delighted to be a part of that. And by offering my Egyptian cookery classes in Shropshire and beyond I hope that I’m contributing – in my own small way – to the county’s success story!

Whether it is a vegetarian mezze class at home or a corporate team building event, cooking an Egyptian meal is great fun and hugely rewarding. My next course is at Harborne Food School on 14 March 2015.

Did you know that the ancient Pharaos brew beer? Join me on the exciting “Ales & Tales” evening in collaboration with Hobsons Brewery on 26th March 2015.

Or why not come and learn to build a coboven to bake Egyptian bread? The Fabulous Coboven Company run regular workshops, one of them is with an Egyptian street food lunch on 25 April in Lentwardine.